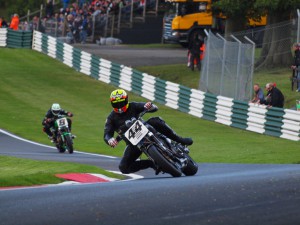 When Gary Byrne gets out on track, it’s not just about winning: he’s intent on fund-raising too. As Gary explains, “I began racing back in 1992 in school boy MX switching to road racing in the Superteens in 1994 Since then I have raced in a number of championships in various classes, winning my first title in 1996 in the National Shell 600cc cup. I also raced in The British Power Bike series, European Superstocks, Suzuki Bandit One make series winning my second title, Ducati Monster one make series, French Endurance Championship. I took a break from racing when my son fell ill.”

His son’s illness was life-threatening but, thanks to the team at Great Ormond Street, he is well and thriving today. So, to thank them for saving his son’s life, Gary is determined to raise funds for the hospital and to raise awareness of the vital role that bone marrow donors play in saving lives.

To do this he’s joined forces once again with the Blade Group to contend the Harley-Davidson XR1200 Trophy this season, supported by a number of events aimed at encourage people to become donors and to raise money for the hospital. Fund-raising kicks off at the Ace Cafe on February 27th where Gary’s race bike will be on display alongside an interesting array of flat track bikes.

You can help Gary and the cause by going to www.justgiving.com/garybyrne44

This entry was posted in News. Bookmark the permalink.