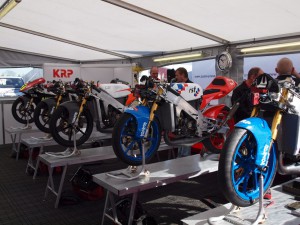 KRP Team Bikes in the Paddock

The KRP team, backed by the Racing Steps Foundation, are intent on bringing on young British riding talent and preparing riders for the world stage. The process clearly worked with Bradley Smith and the team are rightly proud of him and are keen to develop more young racers. Last year they entered several races in the Spanish 125 national championship, as well as maintaining a strong team in the British 125 championship.

This year, things will definitely step up a gear: the team are entering John McPhee and Frazer Rogers in the Spanish championship on a full-time basis as well as running at least two riders in Britain. The competition is fierce in Spain  and it’s great preparation for the World stage. They’ve bought Aprilias, rather than the Hondas they are used to, for the Spanish campaign, a logical choice for the higher temperatures and long flowing tracks out there. Not only that, but they invested in a second team truck which will remain out in Spain all season, and the riders and team boss, Mark Keen, will fly out to each round one to two weeks in advance to ensure thorough testing at each round. As Mark explains “last year we used to turn up on a Thursday (before race day) and our riders would be learning the circuit and feeling their way round: they’d really be on a back foot compared to Spanish riders who had been testing for two weeks.”

Despite the lack of testing at the Spanish rounds last year, the team started getting decent results towards the end of the season and McPhee and Rogers plan to be challenging for podiums this coming season – with the Aprilias hopefully providing  that extra edge.

The team certainly take the business of developing young riders seriously and Wayne Ryan, who is staying in Britain for another year on the Honda 125s, will be joined by Callum Bey who’s just about to turn 13 and who won the Best Novice in Thundersport award for his performance in the Superteen class last year. The fact that KRP will be competing in two championships in two different countries at the same time this season doesn’t daunt them, but they are conscious that they’ll need to be extremely organised. But that shouldn’t be a problem: watching the KRP team in action at BSB rounds last year you couldn’t help but notice the slick way they got five 125s and five young riders out onto the grid at the same time.

But the long-term goal is to prepare the riders and the team to compete in the Moto3 class at GP rounds in 2012 and work on the chassis for their Moto3 bike is already underway. Mark Keen is conscious of the lack of UK teams in the GP paddock and, with backing  from the Racing Steps Foundation, knows that they can address this whilst at the same time, pacing the efforts of the team to make sure each rider runs in the appropriate class, be it in the UK or Spanish nationals, or at World level.

You’ll be able to see the Spanish half of the team on British soil on occasion throughout the year, they’ll be at the BSB Brands Hatch round and John McPhee will be riding in a support race at the British Grand Prix at Silverstone in June, but Frazer Rogers will be too young to join his team mate.

This entry was posted in News. Bookmark the permalink.