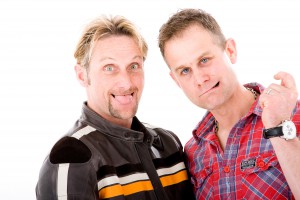 Foggy and Whit - Givin' it Gas

Following the huge success of their debut UK chat show tour 2010 our Guest Editor Carl Fogarty and chum James Whitham, are gearing up for a turbo-charged repeat performance this year. ‘Foggy and Whit: Givin’ It Gas’ was a sell-out smash last year and the pair have announced six new dates in May at venues around England. Opinionated and hilarious, this is Carl and James at their irreverent best – live and uncut!

With their own unique brand of verbal sparring, they provide insight into today’s world of racing, recall former glories and disasters, and discuss the burning issues of the day – on and off the track.

Looking ahead to the tour, Carl said: “it went down really well last year. I was quite nervous about whether the chat-show format would work but the audiences loved it and it was a no-brainer to do another tour this year in some of the regions we didn’t visit last time. In fact, if the response is as good this time around, we might do another six dates in September as well.” James added: “Last year was loads of fun – a good old-fashioned road trip. But, more importantly, we had a fantastic response from everyone who attended so this year ‘Givin’ It Gas’ is bigger and better – and hopefully just as much fun for everyone.”

The on-stage chat and question/answer sessions will last around two hours and each event will feature a charity prize draw, which raised almost £10,000 for local causes in 2010, plus the chance for autographs from Carl and James.

Tickets are priced at £20 and for details about how to purchase them visit www.foggyandwhit.co.uk.