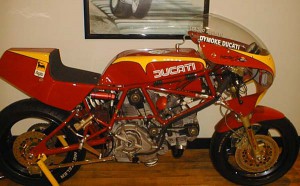 Three decades ago Harris Performance were making frames for a range of (what were then) current sports bike engines ranging from the Kawasaki Z1000J and Z1A to the Honda CRB900 and Suzuki GSXR1000 and GS1000.

Fortunately Harris kept the equipment and know-how to manufacture the frames – demand has them and the kits for building a full bike based on these frames has soared and is surprising the company’s directors.

The twin shock and full floater frames are proving to be very popular and are selling well to people who want to build their own post-classics – in fact the resulting bikes have won the Manx GP post-classic races in the last two years.

But as Steve Harris explains “all sorts of people are buying them: as street bikes, to race them and for track days. I’m surprised at the guys who build them purely for track days, but why not, if they just want to have fun with their mates?”

The Ducati TT2 kit is generating a lot of interest too, Steve says “it’s an amazing thing because we built them 30 years ago and fortunately we kept all the jigs and fixtures, so we can make them again. Interest has really surged and we’ve five on order at the moment, with two going to Los Angeles to be raced there; there’s quite a good scene over there.”

Harris offer a choice of a frame kit or a full rolling chassis for all the models, which also includes the TZ250/350 which won the European Classic Championship in 2009 and the same bike will be competing in 2011 too with Graham Veryard aboard.

The cost varies depending, not surprisingly, on what you buy. Frame kits (comprising the frame, swing arm, sock, tank, seat, fairing, brackets and rear sets) start at around £5000 and you can build this up to a full rolling chassis and a full kit will cost between £12-15000.

So, what’s behind this rise in popularity? “The guys who raced these bikes have got older, and so have their bikes – they want to re-create their youth and ride what they used to race, whether that’s a TZ or an F1. I never envisaged them becoming ‘classics’. It’s a sign of the times and a sign that I am getting old” Steve admits “but by the time they get classed as ‘vintage’ I hope I’ll have retired!”