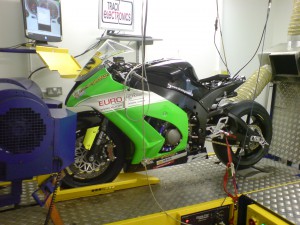 Track Electronics initially specialised solely in race wiring but four years ago they purchased their dyno, and continual upgrading means they have remained at the cutting edge of all elements of race electronics and engine management setup with customers from BSB through to sportsbike owning road riders.

Last year they became an official MoTeC dealership with emphasis on race bikes and are also an official supplier/ installer for the AIM Sports range of data loggers.

This year owner John Ewles will be supporting Bournemouth Kawasaki in BSB EVO & Seton Tuning in Supersport whilst also supporting a number of riders racing in the support series including Dave Gowen and Baz Chapman on their BMW S1000Rs in the Superstock 1000 class using the AIM Sports EVO 4 data logger and Bike Interceptor Module for fuelling.

The EVO 4 is the perfect data logger for race bikes, it can be mounted anywhere (i.e. out of harm’s way!), has GPS as standard and talks to most bikes’ standard electronics meaning Track can cut down on the wiring needed. A typical install costs £1600 + VAT and includes GPS track mapping/ rpm/ throttle/ front and rear suspension travel – velocity and front brake pressure and comes complete with all required sensors and brackets. It’s easily upgradeable and can be taken from bike to bike as the rider progresses through the classes.

The Bike Interceptor is a plug-in module that allows the fuel injection to be altered to the engine’s requirements for optimum power and drivability. The Supersport version retails for £284 (excl VAT & setup) and has many features that make it stand out from similar products. It lets you control of all the bikes injectors, much like a kit ECU, it has more throttle mapping points (meaning more detailed fuelling),  switchable mapping, a pit lane limiter – and a Quickshift sensor can be plugged straight in. To get the same level of functionality with rival products would mean not only buying the fuelling unit but additional devices for each function: basically you would  end up with a subframe full of expensive black boxes.
This season looks set to be the busiest yet for the Norfolk based company, as John himself says “dealing with so many teams, all of who want their secrets guarded means there has to be complete confidentiality in all aspects of our work, year on year the support we have been asked to give has grown so hopefully we have struck the right balance”.