Four Seasons in One Day – BSB Kicks Off 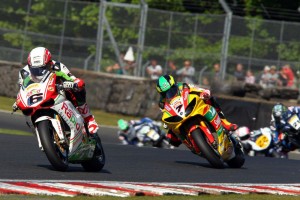 The first race of the BSB season had plenty to entertain and hook new fans – it ws so packed full of thrills and spills it was all that’s good and evil about racing packed into 45 minutes!

First, the predictable bit. The four front row bikes of Byrne, Kiyonari, (both HM Plant Hondas) Hill and Laverty (Swan Yamaha) got away at the front but in-fighting meant they never quite pulled away from the chasing pack, headed by Easton .

Then there were the heroics. Alex Lowes (on his first ever Superbike race, we reckon) on the WTR EVO bike was leading the EVO race and got up to fifth place overall at one point, although he faded towards the end to finish in 12th place.

Then there was the drama amongst the leaders. Kiyo suddenly retired with a technical problem. Two minutes later Laverty highsided out of the lead, and straight into the path of Hill and Byrne, who both managed to stay upright, but were forced into the gravel. Hill, who was closest to calamity, rejoined in 11th place but Byrne was luckier. He managed to salvage second behind Stuart Easton and, after the Safety Car laps, was able to easily take the lead back. Meanwhile, Brookes had clawed his way up to second place from a dismal 13th on the grid, but a highside whilst trying to match Byrne’s pace put paid to his chances.

Then the real fighters started to demonstrate true grit, as is traditional at BSB events. Hill made an astonishing recovery to get up to second place and he clearly inspired Tommy Bridewell who ripped past Easton at the very end of the very last lap to snatch the third podium position.

There was disappointment for Baz, Rutter and Easton who lost ground after a strong start and disaster for John Hopkins whose BSB debut was marred by a crash on lap 11 – he remounted to finish seventeenth and out of the points, whilst team mate Kirkham came a sound fifth.

Race two was a more sedate affair. The Swan Yamahas and HM Plant Hondas dominated at the front and whilst their were individual battles going on all the way down the field, the clash between these four took our focus – Hill was victorious after Michael Laverty lost touch and Bryne made an optimistic move on Hill at Paddock Hill bend, which forced him back to third behind team mate Kiyonari.

Disappointment for Tommy Hill at Oulton Park – a crash in the warm up session ruled him out of the day’s racing, meaning Kiyonari, who has an uncanny ability to win at Oulton Park, but who was struggling with set up, had one less rival to worry about. We also wanted to know how John Hopkins would get on with an unfamiliar track – the answer was ‘extremely well’!

By lap three, Laverty, Hopkins, Brookes, Byrne and Easton were in the mix at the front of the field, with Kiyo lagging in sixth place – but whilst those ahead of him clashed, he was able to put in some really quick laps, caught them and started picking them off one at a time until lap ten, when he took the lead from Laverty – and stayed there!  Hopkins led the chasing pack and behind him the finish saw Byrne, Easton, Laverty and Brookes all finish within 0.7 of a second of each other.

Race two was dominated by a spectacular crash in which Brooke’s bike overtook Easton twice in as many seconds. Unfortunately, the bike was riderless at the time and bounced dramatically onto and off the track whilst Easton tried to dodge it. “It was like a plane crashing over my head” he said. There wasn’t much of Brookes’ Relentless Suzuki left and the safety car got called out whilst the debris was removed (Brookes was OK). This was bad news for Easton – he lost the small gap that he and Brookes had built up before the crash and the seven lap sprint to the finish after the safety car left the track didn’t work in his favour. Laverty and the Hopkins overtook him but he was able to hold off the challenge from the HM Plant Hondas.

Laverty was having problems staying on the track – he followed up a small excursion earlier in the race by hitting the dust at Old Hall and losing out on first place to Hopkins – and then on the last lap went grass tracking again, demoting himself to fifth.

Hopkins meanwhile was ecstatic to get his first BSB race win and Easton and Byrne joined him on the podium.

Shane Byrne now leads the championship with 70 points, with Easton, Kiyo and Hopkins really close together (59, 58 and 56).

The next round is a Croft on May 15th.

This entry was posted in News, Race Reports. Bookmark the permalink.