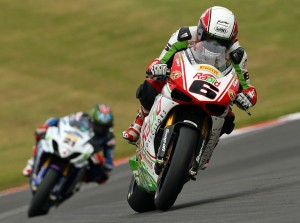 Michael Rutter is aiming for the top 6

As we reach the sharp end in the contest for the British Superbike Championship, defending champion, Ryuchi Kyonari is in danger of missing out, while riders from as far down as 10th in the standings have still got a chance to be in the Showdown.

Shane Byrne, John Hopkins and Tommy Hill have already guaranteed their places in the 3 race Showdown; but the other 3 places are still up for grabs. Michael Laverty, Josh Brookes and Ryuchi Kiyonari currently sit in the remaining Showdown places. But Michael Rutter, Gary Mason, John Kirkham and even 10th placed Peter Hickman, still have a mathematical chance to sneak in to the top 6.

With the cancelled race from Oulton Park added to the bill for Cadwell, anything could happen in the race for the Showdown.