BRADLEY SMITH TO JOIN MOTOGP IN 2013

Bradley Smith has signed a new three-year deal with his current team, Tech 3 Racing. The deal is a massive boost for him, as it guarantees him a ride in MotoGP by 2013.

Bradley will remain in Moto2 in 2012 but as part of his contract, he will move to the Monster Yamaha Tech 3 MotoGP team for the 2013 and 2014 seasons.

The soon to be MotoGP star hasn’t let his success go to his head, and he took time out to have a chat with us – you can find the full interview in this month’s issue (144) of Racer – available from all good newsagents and www.motorcycleracer.com later this week! 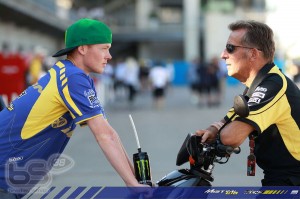