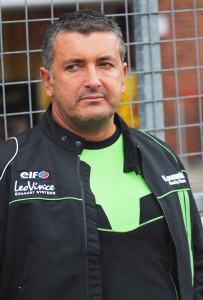 Tom Sykes claimed his first World Superbike win when proceedings resumed at the Nurburgring after the summer break.

It was an impressive ride in horrendous conditions – the race was red-flagged after Sykesy had completed two-thirds race distance because the track was rapidly disappearing underwater – and he hung on to finish after Haga slid off track and out of the lead. The victory made for emotional post-race celebrations as his team, Paul Bird Motorsport, had just heard that Kawasaki won’t be renewing their support for the team next year.

The race win, combined with pole position in a washed-out at Misano back in June, demonstrate what Sykes is capable of aboard the 2011 ZX-10R and we’re hoping he gets offered a ride with the new Kawasaki team for next year – whoever that might be – answers on a postcard please – but we reckon Pere Riba will be involved.

This entry was posted in News and tagged Kawasaki, Paul Bird, Tom Sykes. Bookmark the permalink.