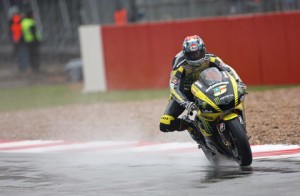 Colin Edwards’ contract with the MotoGP Yamaha Tech3 team isn’t being renewed for next year and he’s confirmed that he’ll be joining forces with the Forward Racing team to contest a CRT (Claiming Rule Team) bike in the 2012 MotoGP series.

The team want to use a Yamaha 1000cc engine and they are hoping to persuade Guy Coulon to help with frame. It’s unlikely we’ll see Edwards on the podium next year, though, as he sees this as a chance to use his test riding and development skills rather than to get race wins.

We’ll be explaining the whys and wherefores of CRT in detail in the next issue of Racer but put simply, they aim to encourage more teams onto the MotoGP grid, by allowing factories to sell their race engines to other participants.

This means the Tech3 team have a new rider in mind. A possible replacement for Edwards could be Andrea Dovizioso, whose contract with the Repsol Honda MotoGP team is coming to an end, or perhaps a World Superbike rider. Bradley Smith wants to stay in Moto2 to hone his skills for another year so he is unlikely to be making the move up to the 1000cc machines any time soon.

It’s all speculation at the moment. The team hope to make an announcement at Aragon on 18th September.

The CRT concept will stick rigidly to prototype machinery though, so it’s not aimed at competing head on with Superbikes, at least in the foreseeable future, but it does narrow the margin between the two series.

This entry was posted in News and tagged Colin Edwards, MotoGP. Bookmark the permalink.