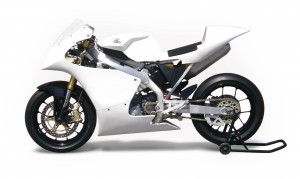 The GP45 kit, crafted by Beon, a Spanish company dedicated to the 450 race class and their own Moto3 project, creates a real race bike “created by racers for racers” from a 450 single-engined bike. These prototype machines replicate GP250 geometry but use off-road donor bikes. British distributor, Ashley’s of Yeovil, have brought the package to the UK and they’ve forged a successful partnership with one of the UK’s biggest and most popular clubs, NG Road Racing, who host the Pirelli UK GP45 Championships.

The kits are available for all popular models of 450cc single plus the SXV 450 Aprilia twin. The resulting machine is lightweight, and tyre wear and fuel have proved to be super-economical out on track. What’s more, bespoke race parts can be made to complement your kit, making your GP45 as competitive or as economical as your budget dictates. The bike can always be restored to its dirt-bike trim at the end of the racing season.

Ashley’s can fit the kit for you and they can source the donor bike too – so whatever level of experience you have with mechanics and choosing a bike –  they can help.

There’s also a GP45 road bike, which Ashley’s Martin Thrower describes: “it’s an offshoot from our GP45 race bikes, taking what we learned throughout the season and applying it to the road bike. The current bike is the mark three build, we are still developing some more upgrades which will also be available when race proven on track.” The pictures below show the before and after versions of the race bike transformation – we think it’s a lovely looking machine.

We’re very pleased to announce that Ashley’s have put together a special offer for Motorcycle Racer readers, as follows: SAVE £500!

Order your GP45 kit for your Honda, Yamaha, Suzuki, Kawasaki, KTM or Aprilia 450 before October 31st and get it for just £4330 including VAT and delivery – saving you £500. Hurry offer ends soon!

This entry was posted in Products and tagged Beon, GP 45, Moto3. Bookmark the permalink.