The Gardners hooked up with the Monlau race team to contend the Spanish CMV 125 Championship this year – Remy was one of a team of six riders  in the team.

Former 500cc World Champion and Remy’s father, Wayne told Racer: “We entered the Spanish CMV Championship because Australia’s an appallingly bad place to race if you’re young – the age restrictions vary from state to state and in new South Wales you can’t race on track until you’re 13. In Spain it’s 12 years old. Remy did dirt track for three years but really wanted to do a road race so last November, thanks to a Honda sponsorship tie-in, an opportunity to race in Spain came about. I said to Remy: ‘there’s a grid of 35 and you’ll get fogged. Do you still want to do it?’ The answer was a definite yes and whilst he came 27th, he got better and faster during the race and said afterwards ‘that’s the most amazing thing I’ve ever done – I don’t ever want it to stop.’ Then we flew back to Oz and Remy was able to enter a race at Philip Island on a Moto70 bike, he came third and won a title in only his second ever race. I thought – Jeez, something a bit special here.”

Remy’s first full season of road racing began in April this year at the Parcmotor, Castelloli Circuit.  Poor weather at the beginning of the day made tyre choice a gamble, one that almost paid off for Remy.

Riding a brand new RMU pre GP 125, he shot from twelfth on the grid to third in the first lap and took the lead in lap three only to be bitterly disappointed when the gear shaft broke, ending his first race of the season.

Issues with the RMU plagued Remy in testing before round two at Alcarras and his team decided to swap the bike for a Metrakit.  Despite a lack of race experience on the bike and an unfamiliar set up, he managed a safe nineteenth from twenty fifth on the grid.  A team decision was then made to return the RMU bike, withdraw him from the 125s and enter him into the Moto 3 class on a Moriwaki framed bike which they shipped over from Australia.

He put his head down to learn the circuit and qualified in 6th position.  Legendary World Champion Kenny Roberts turned up on the Sunday to cheer Remy on, and was impressed to witness Remy’s first Spanish podium as he took second place over the line behind another Moto3 bike.  Buoyed by his last result, Remy turned up at Parcmotor for round four, determined to stand on the podium again.  After taking his first ever pole position he won the race by a convincing two seconds, delighting himself and his proud Dad.

With high hopes of continuing his success, Remy was disappointed in round five at Alcarras after some translation issues with a new suspension engineer meant his bike set up on race day wasn’t what he’d hoped.  After nearly crashing and losing the front end, he decided to take it easy to bring the bike home and grab the points.  He finished 4th in the Moto 3 class that day.  The final round at Albacete was challenging, but in the end Remy walked away with second place on the day and second in the Moto 3 Championship.  A huge achievement for his first year of road racing and one Team Gardner are extremely proud of.

“Remy wants to keep moving on. He’s got a dirt track championship in Oz to finish now, and we’re looking at the Red Bull rookies championship and the Spanish CEV Moto3 is another possibility. It’d be great if he gets to GPs when he’s 16. But right now it’s not about winning, it’s about learning and enjoying the journey. This year was very toe-in-the-water – it’s been a hard year, with 36 hour flights back home after each round and it can’t work doing this long term.”

This isn’t a family that lets hurdles stand in its way, so they are upping sticks and moving to Spain lock stock and barrel. This season Remy arrived on the Thursday at each track and had to learn the circuits fast.

Remy said: “when I look back at the year like this, it seems like a lot has happened in a short amount of time and it went too quick.  I want to go racing again as soon as I can but now I have to wait until next year to race in Europe again.”

“We’re moving to Spain in January so my bother Luca and me can do more racing in Europe and I can’t wait.  I really love Australia but I love racing more, and when I had to leave Spain after every race this year I didn’t want to go.  I’m pretty happy with my results this year.  Dad keeps telling me I’ve done really good for my first year, but I’ve been dreaming of it for a long time and I always want to do better,” he added.

“Anyway, I know what it’s like now to stand on the podium in a really good championship, racing against really good riders and I want to just keep doing it,” he said. 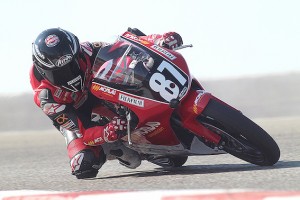