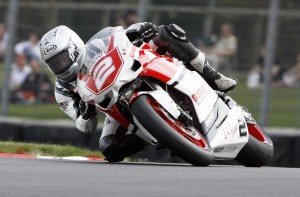 After finishing in second place to Darren Fry last season, Leon Morris secured the Ducati 848 Challenge title at Croft at the start of September, after dominating the series this year.

There’s still one round to go (Silverstone at the end  of September) and our money is on Racer contributor Mike Edwards for second place although, technically, Ducati Manchester’s Robbie Brown can still beat him. The series has got the go-ahead for next year which is no surprise to us here at Racer – the number of entries has increased throughout this year and with exciting races and a lot of dealers able to put teams forward, it’s proved a successful way to promote the 848 to race fans.

This entry was posted in News and tagged Ducati 848, Leon Morris. Bookmark the permalink.