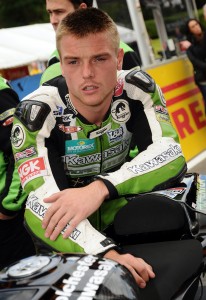 Alex Lowes has parted company with MSS Colchester Kawasaki after one too many incidents with the bike. Ian Lowry will take his place on the 2011 ZX10-R as Gary Mason’s team mate for the rest of the season. James Westmoreland has fallen out with Motorpoint Yamaha, and team manager Rob Mac has recruited Lowes to fill the empty saddle. This will be Alex’s fourth ride of the season – as you’ll remember he started out this season on the WFR Honda EVO bike but a berth at Motorpoint might be just what he needs. Meanwhile Jake Zemke has gone back to the USA, leaving a gap in Miles Schofield’s team which has been filled by – you guessed it – James Westmoreland. Westy’s role will be to test and develop the bike for next season over the final rounds.

This entry was posted in News and tagged Kawasaki, Sam Lowes. Bookmark the permalink.