After rain, oil and security alerts led to lots of cancelled races at this year’s North West 200 road race event in Northern Ireland, there are changes afoot for 2012, as we expected.

The new plans include scheduling several races for the Thursday evening as well as the traditional Saturday racing, with the aim of building some breathing space into the race programme so that, whilst challenging conditions might disrupt the event, spectators and racers won’t be disappointed.

A new day time practice session is scheduled for Tuesday to give riders valuable extra track time prior to the races.

There’s on-going consultation with local people who live and work on the course to make sure disruption to their day to day lives is kept within reason. The new plans mean they’ll be either shut in or out of their homes and businesses for several sessions throughout the race week, and the organisers, Coleraine and District Motor Club are keen to make sure they get the balance right.

It also means that race fans can pop over to Northern Ireland during the week, catch some races and return before the final weekend, which is good news – it spreads the load on ferries and flight bookings too.

For more details and updates check
out www.northwest200.org. 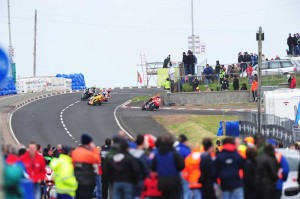