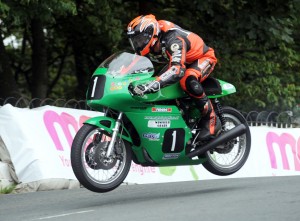 Ryan Farquhar took three race wins at the Manx GP. The first was the 350cc Classic and heavy rain before the race start meant conditions were really difficult and they rapidly got worse when more rain arrived. In the 500 Classic he lost the lead after pit stop issues but pulled back an advantage to win by nearly two minutes. In the Post Classic Superbike race he was challenged by Mark Buckley after Michael Dunlop pulled up. Then Buckley retired and Farquhar won his third race of the event.

JHS Racing boss, James Holland, was ecstatic with the supreme ride by Dave Moffitt on his JHS Racing built SV650 Supertwins machine at the Manx Grand Prix.  Moffitt beat off fellow riders to storm to a race win and set a new lap record of 109.547mph in the Manx Grand Prix Super Twins Race.  Holland, a senior race Engineer said, “it’s been a tough year, but the JHS Racing team and Moffit have worked really hard together, and the results speak for themselves! Here comes the TT 2012!”

This entry was posted in News and tagged Manx GP, Ryan Farquhar. Bookmark the permalink.