The final three for the Triumph Young Guns competition has been announced (and by the time you’ll be reading this, the winner will have been decided!). Adam Robinson, Lee Jackson and Chrissy Rouse beat off stiff competition to progress to the final stage and the talented trio will face off at Thruxton during the final NG Road Racing Event on the 15th of October.

The youngsters will be riding a Daytona 675 (Triple Triumph Spec) at Thruxton, and they will be running in the Sound of Thunder and the 600cc races. All three riders will no doubt be pushing hard to come out on top at Thruxton, but the winner of the Triumph Young Guns 2011 is decided upon the competitors conduct and performance for the whole year – so even without a race win, it is possible to win the title.

Young Gun hopeful, Chrissy Rouse told Racer: “I’m delighted to have been chosen for the top three and I’m really looking forward to getting out on a Triumph. I have never ridden anything bigger than a 450 so it will take some getting used to but I’m sure it will be a great experience!” He added, “For the future, I’m hoping to win the Young Guns then race in the Triumph Triple Challenge next year. From there who knows!”

Nowadays, riders of all ages face the same problem – money. Chrissy told us how winning this competition would ease the pressure. “To win the competition would be incredible for me and my family. It would be the perfect end to the season! As my parents fund my racing, it means every penny we have goes into supporting me, so to get some help from Triumph would be fantastic.”

Guy Masters, general manager of Triumph UK said: “We were absolutely delighted by the number and quality of entries we had to our first Young Guns Initiative. The judging panel was impressed by the passion and professionalism the ten riders have shown – selecting the three finalists was not an easy task!”

We’d like to say a huge ‘well done’ to the winner and commiserations to the two who didn’t win – they’re all set for a bright future in racing! To check out who was crowned Triumph Young Guns Champion, keep an eye on our website www.motorcycleracer.com 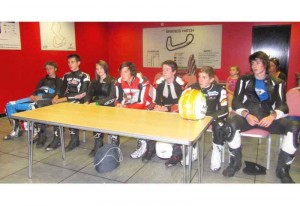