The Darley Moor Motorcycle Road Race Club’s 2012 season woke up to snow on the ground last weekend, Sunday 18th March, although by the time practice was due to get underway, the temperature had risen enough for the track to begin to dry for a period of time at least.

First out on track were the Peak Cup machines and current champion, Jim Hodson, asserted his authority on the newcomers with a double victory.

In a packed schedule, every rider was keen to make the most of the track time and the ‘ride of the day’ came from Stoke on Trent rider, Richard Wardle. As the rain poured down in the first Formula 600 race Wardle, without wet tyres, came right from the back of the grid, cutting through the whole field, to take race victory.

The ‘race of the day’ came in Race One of the Open Solo class, and it was that man Jim Hodson again – this time in a battle with Lee Vernon. Hodson led across the line for the first four laps, but Vernon managed to edge in front when it mattered and snatched victory.

Despite the less-than-perfect weather, all the competitors dug in and produced some enthralling racing, but everyone will be hoping for better conditions in Round Two on the 9th of April. 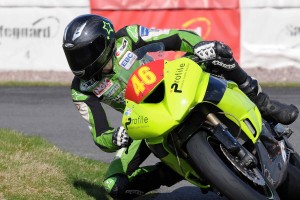 This entry was posted in Club Results, News and tagged Darley Moor. Bookmark the permalink.