This is a novel approach to selling your race bike – rather than stick it on eBay you can hold a raffle. That’s what the Rea Racing team is doing with this steel-framed 600cc racing machine, which started life as a road bike and became a freshly-built race bike in 2011.

The engine produces 109bhp and has been freshly painted red and black, as shown. It cost around £4000 to build and has been raced for roughly half a season, competing at Aintree, Three Sisters and Anglesey. This bike has the honour of having put its rider, Ben Rea, on the podium in every race it has started, it has set lap records and can claim to have helped Ben on his way to the Preston and District Club’s Rookie Championship.

If you are feeling lucky, you can invest in some tickets. Details of the raffle are on
www.rea-racing.co.uk. A strip of five tickets costs £10 and if you buy three strips (that’s 15 tickets) the cost is £25.

Rea Racing is planning to close raffle entries in mid-May (assuming enough tickets have been sold at that stage) and will have an independent adjudicator draw the winning ticket. 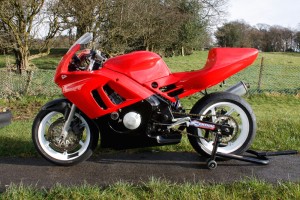