The guys at Triumph Race Support are no strangers to modifying Triumph Daytona 675s, so when Harvey Bowden approached them last November and asked if they could build a street-legal, race-ready Street Triple 675, owner Si Westwood was up for the challenge. He’s been working with 675s for over four years and has just become the leading technical advisor for the new Street Triple Cup Race Series.

Harvey wanted the best of everything! As Si recalls, “we put several ideas forward before he accepted our final build spec – he wanted Lexus quality and affordability.” They did, allegedly, clash on a few things, with Harvey preferring Ohlins Suspension and Si putting the case forward for K-Tech, on the grounds that their kit is every bit as good and made in the UK. TRS opt for local businesses where they can and, with Scorpion Exhausts just 6 miles away and other companies like K-Tech and Sprint Dampers nearby, that makes perfect sense.

The first items fitted to the bike were crash protection components, with products from GB Racing and Evotech Performance being top on the list. TRS try to personally test everything they sell – which is not to say Si crashes a lot, but he does have to believe in a product to sell it! Next came the newly-developed body kit with, TRS believe, the first Daytona RAM air technology to be used on the Street Triple. A new nose cone was made with large air intake and a clock bracket to completely replace the heavy stock mounts up front. This gives pressurised air straight into the airbox and is filtered through a MWR HE filter.

Underneath the bike sits a race-spec belly pan. The Triumph aftermarket belly pan was copied and made water-tight – as per the race class regs – so not only does it look good, it also does what it’s designed to do if the engine blows! At the back and also new is the single seat unit. Si explains, “we tried a Daytona one, but the different frame rails meant it wasn’t as good a fit as we needed, so it was back to the drawing board and, after many hours, the seat unit was finished. It’s a nice rounded shape which matches the Street better than the angular Daytona seat unit.”

To keep the bike street legal but too allow a quick change from road to race meant a small tail tidy had to be designed and made in-house, one which was quick and simple to change. Then came fold-up levers, braided brake hoses and very trick PFM discs with a unique design, which means the disc can be separated from the carrier in a split second. This means you only have to buy one set of discs and a second set of disc carriers to mount to your spare wheels. This keeps costs down and means the brake pads are always bedded into the disc on whichever set of wheels you are using.

Meanwhile, Scorpion were busy developing a full race exhaust system for the Street Triple. The results are a good, clean system with genuine power gains which isn’t too noisy. The TRS development bike had zero miles on the clock when it was first dyno-tested, so things were taken very gently but results were still very good.

Si uses a few different software and hardware devices to remap the bikes. Bazzaz engine management kits are a favourite, along with Tuneboy and TuneECU – free software which is used to talk direct to the ECU and make changes to fuelling and the ignition. Harvey’s bike is currently running a modified Triumph map but, when the engine has more miles on it, the plan is to spend a day on the dyno squeezing every last pony out of the bike. We hope Harvey enjoys riding it – lucky man! 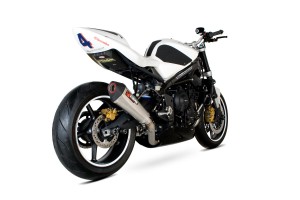