One of the only two hopes for Britain in this year’s MotoGP, James Ellison, has decided to put his trust in fellow Brits, Knox Armour, to protect him during his eagerly anticipated return to MotoGP on an Aprilia CRT machine this year.

As the sole rider of the UK based Paul Bird Motorsport team, James has chosen to keep it British and wear the new Knox Track vest, which comprises of a Level 2-approved back protector and chest protectors fitted into pockets at the front.

The vest uses Meryl Lycra, which is very breathable and moisture-wicking due to its raised channels and vents so, even as it heats up on track, James will be cool and fresh. And because no one likes smelly safety kit, unlike any other garment of its type, the Knox Track Vest can be unzipped, and the chest armour removed so that the vest can be washed.

The vest is designed to be stretchy, light, thin and to sit snugly even under a tight race suit, so it is perfect for the active rider, who requires a high level of comfort and movement without compromising on safety. In fact, rather than just ‘not compromising’ on safety, the Knox Track Vest actually exceeds the highest safety rating possible under current EU testing regulations.

It comes in sizes S-XXL and you can get yours from www.planet-knox.com for around £149.99.

As far as we’re concerned it’s a top piece of kit, but don’t take our word for it, this is what a certain Mr Ellison had to say: “It feels so good on, and I must admit I’m pretty impressed at how non-intrusive it is with my full race kit on” – good enough for us James! 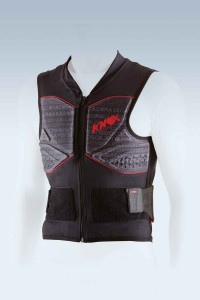